skip to main | skip to sidebar

I know it isn't until tomorrow but I think tomorrow is going to be a pretty busy day so since I have some time on this lazy Saturday morning I wanted to post. Last year my kids were characters of Toy Story and we decorated our van with Toy Story stuff for our churches trunk or treat. This year Jeff wants to do a crime scene with our van so the kids are going to be clue characters. GG is Mrs. Peacock, Monkey is Coronal Mustard, Red is Mr. Green and Peanut is Mrs. Scarlet. Their costumes are a little lame but it was the cheapest easiest ones I could come up with to go with the van. I am really hoping that the weather will be fairly warm tomorrow! I also may come back and update this post with a picture of the kids in costume :) 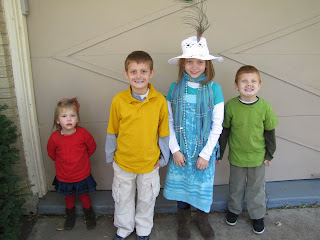 Just two days ago my kids had no costumes and now they each have two!!! In years past Chipotle has given free burritos on Halloween to people who come as a burrito. I was planning on getting some tin foil and wrapping up the family this year. Well Chipotle is doing something different this year. Check it out here. If you come dressed as a processed food you will get a burrito for $2 and that money goes to Jamie Oliver and the food revolution. What a great cause! After some thought, I came up with some costume ideas. Peanut is going to be Mrs. Scarlet and will be in a red shirt with a skirt and red leggings. If I take the skirt off and put a ketchup label on her she has a second costume! Monkey (Coronal Mustard) will be in all yellow...print out a mustard label and we have our second one done! GG wants to be mac and cheese so she will wear two boxes on her arms. Red is going to be cereal. I pulled two boxes out of the recycling bin, cut them open and taped them together! I am going to be a bag of chips...same concept as the cereal but with bags. And Jeff is going to be a hersey kiss and wrap his head in tin foil ;0 We are a family of junk food...haha. I hope to have pictures of both set of costumes!!! ***update*** I didn't get a picture of us in our food costumes. We were so hungry by 7pm that we threw them on and ordered then the kids took them off so they could eat. They really weren't anything special anyway!
Posted by Tonya at 10/30/2010 09:09:00 AM
Labels: Halloween

That is so neat, Tonya! I saw Chipotle was doing that. Can't wait to see pictures.

That is so cool! Sounds like a great time! :)

Me and My Hubby!

My Links and Awards

I am a Women of God award