skip to main | skip to sidebar

Today was my dad's side big family reunion, you know the ones you go to and you don't know who most the people are because there are So. Many. People.They are second and third and so on cousins and in-laws and what not. It rained on us a bit and it was a little on the cooler side of things but fun was still had by all! I haven't been to one of the reunions for 4 years...the last year I went both my grandparents were alive and a few days later they were both gone. Anyways, before we ate lunch they take pictures. My grandpa had 7 siblings (but one passed at age 6) leaving 6 siblings in adulthood, so what they do is take a picture of the families by my grandpa and his siblings families. Are you following me? Each year it is a competition of the 7 families to see who has the most in attendance by the pictures. Most year's my grandpa's family wins because he and my grandma had 7 kids and they had over 25 grandkids who are now having kids and getting married. Not everyone comes but our family picture had at least 50 people (just counted 53!) and there were still 6 other extended families there! See tons of people :) After we ate they played softball and Monkey and GlamorGirl got in on the action. They did a great job and actually hit the ball several times! Here are some pictures from the day... 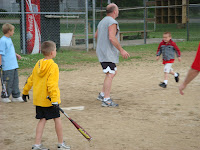 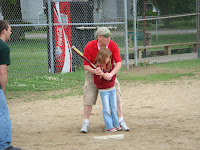 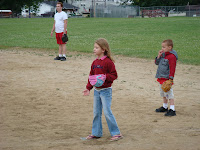 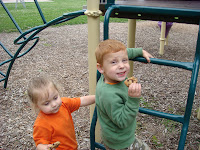 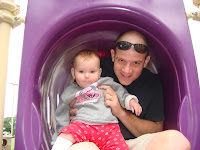 Cute pics! Glad you guys enjoyed the day, despite the weather! When will summer be here??!!!

That's how it always goes with the pictures!!

I had my own family reunion of sorts...my parents who have not spoken to each other in 12 years thought it would be great to mend fences...at my house!
Between that meeting and our ER trip, I'm plum wore out!!
(Guess what we did today...started school. I think I need professional help!)

Anyway, looks like your tribe had a fun weekend!!

A family reunion! Fun! It looks like it was a fun day for everyone!

Wow, that is some family reunion. Ours normally consist of about 40 people. What a great time and next time hand the camera over to somebody else .. I know easier said than done.

Hey there is a picture of you and Ivory on myspace... I tagged it for you so you can save it on your computer and I also tagged you on the family picture so that you could add it as well..... Let me know if you want any others... like you I think I am only in one picture since I am the "picture taker".... IT WAS GREAT SEEING YOU AND THE KIDS.... and Jeff too! :)

Me and My Hubby!

My Links and Awards

I am a Women of God award